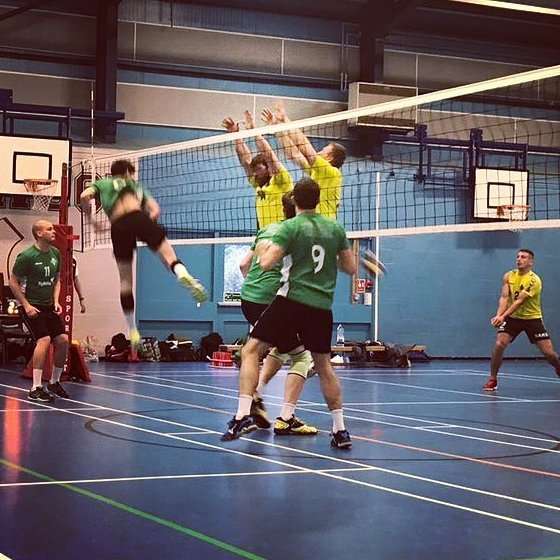 The Green Army were back in action at Noadswood School as they took on league stragglers from Essex, London Baks. Forest were fast out of the blocks as England Cadet setter Josh Green looked to establish his middle attackers and it was England Junior Theo Lucas, who sent some booming hits into the Baks court. Next to impose themselves on the game was Iraj Safaee, who was causing havoc with his float serves – going on a 10+ point service run! The end of the set soon approached as Forest ran out winners by an impressive 25-11 scoreline.

Into set 2 and the errors that had begun to creep into the Forest game towards the end of set two were coming more regularly as Coach James Kemp called a timeout with Forest behind. Refocused and their ears still ringing, Forest soon took the lead again as the experience of Toby Goodman and Alex Lusby-Taylor pulled the boys in green away to another healthy lead. Baks were now struggling to keep up and their frustrations boiled over when Captain Nahailo narrowly avoided a yellow card from the outstanding referee Martyna Curtis, as he vented his anger with a decision. With the Forest block proving impenetrable and heads gone on the other side of the court, Forest took set two 25-14.

Baks now had it all to do as the teams went into set 3 and this was to be the most competitive set of the match. Baks star player Vaidas, who had been nullified throughout the first 2-sets, was now beginning to find some success as the Forest boys began to relax a little too much. Up stepped Coach Kemp, for a cameo appearance, to induce some calm to proceedings as Forest looked to wrap the game up 3-0. Match MVP and England Cadet Ben Lucas duly obliged with Kemp’s request to see the game off, as Lusby-Taylor found Lucas on a combination attack, which fooled the Baks blockers for a stunning smash to win the set 25-18 and match 3-0!

The New Forest Men and Ladies are once again at home on Saturday 10th February versus Oxford Students (12pm) and Beach Academy (2pm) respectively. Come down and support – free seating and refreshments!